A Trip to Pleasure Island

Have you ever had one of those sessions where you are playing bad and know it, yet you find yourself continuing to play, and play poorly? Well, last night I played the starring role in Donkeys at the Meadows.

I played for about four hours at the Meadows ATM (where I also encountered one of their idiosnycratic house rules), after a nice dinner at the Raccoon River Brew Pub with the sig other and some of his gal pals who were visiting from out of town.  The room was pretty quiet for a Saturday night during race season: there was no $2/5 NLHE or $5/5 PL mix game, so I'm not certain where the "big game" degenerates were playing.  At 8:00 pm, there were only two $1/2 NLHE games and two short-handed $3/6 LHE games running, though another table or two opened up as the racing wound down.

The table had a pretty fun vibe, and there were weird hands galore.  The strangest run of variance was for one guy who laid down quads on back-to-back hands.  Well, he laid down hands that would have become quads had he stayed in.  The first hand he held 88 on a 7-7-5 board, but gave it up after a raise and reraise, only to see the board roll out 8-8.   The very next hand, he folded A4s to a big preflop raise and reraise, only to see the board run out 4-A-4-4-x.  I took a big hit on my second hand when my AKo ran into Q3 soooted on a board of K-Q-3-A-3.  Blech.  But I built my stack back up on the fifth hand, when my sooooted Spanish Inquisition (6-3, a much stronger hand than Q3, obviously), outran AhKh on a board of 6h-4h-2d-3x-6x.   Hilarity ensued!  I also helped the cause with a couple of good reads to pick off bluffs, but got stacked when my QQ ran into AK and the A flopped.  Le sigh.

At that point, I began my Pleasure Island conversion into a total donkey.  For those of you who aren't old enough to remember the Disney version of Pinocchio, there is a part of the film where boys are lured to a place called "Pleasure Island" where rules didn't apply to them, and they could drink, smoke, gamble, and generally "make jackasses of themselves".  Of course, as in all good morality tales, these boys became cursed, by literally transforming into donkeys who are sold off by the evil lord of the Island to work in salt mines. 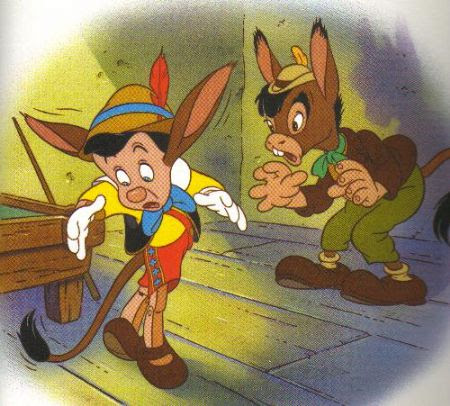 My problems began with an inability to figure out the right approach to the table.  There was a weird mix of short and deep stacks, and differences in styles of play.  For some reason, I ended up shifting into a too-passive mode of play, finding myself getting into pots with decent starting hands, then having to abandon ship when either a tight player made a big bet/raise, or a deep player showed too much interest in a pot.  I did manage to pull off one nice bluff by check-calling the flop and turn with AQ unimproved, then value-bet bluffing the river based solely on a correct read of an unimproved overpair to the flop that got scared of two overs hitting the turn and river.  Of course, I lied and told the guy I had called with overs and paired my Yak on the turn, which seemed to annoy him (which pleased me).
Unfortunately, that play was the exception for my skillz.  In addition to letting myself get bled to death by not tightening up in early position—Position? We don't need no stinking position!—I ended up gacking off my stack with a semi-bluff on the turn with KJs, having picked up a gutshot straight draw to go with my flopped flush draw.  I got called by a turned set of Queens (ouch!), and bricked the river.  Doh!  Apparently, my instinct to check-raise the flop was correct.  Aggression?  We don't need no stinking aggression!  My next stack-off was even more brainlocked, shoving with AQ on a Q-high flop ... into bottom set and a flopped straight.  Error!  Big pot?  We don't need no stinking big hand!  At that point, I knew I was mentally not on my game, so I called it a night.
I still had an hour or so to kill before picking up the gals from the bars, so I wandered down to the casino floor to see if my buddy Brian was playing craps.  Brian wasn't around, but I was bored, so I sat down at the $25 blackjack table, something I hadn't played in months.*  I ended up getting blessed by the blackjack gods, and was able to win my poker buy-ins back plus a nice buy-in profit on top!  My biggest hand was a $100 bet where I was dealt 88 against the dealer's 5.  I split it out, and my first hand found a 3, which I doubled, and hit a 10!  Yahtzee!  My next 8 found another brother 8, so I split again.  The second 8 drew a 10.  The third 8 found another 3, I doubled again, and again drew a 10!  Donkey Kong!  The dealer showed 15 total, and busted on one card, bringing cosmic balance to the Force.  As I told the very attractive female dealer, "If I weren't gay and married, I would totally kiss you."  Since I was sober, I cashed out before I became like the drunk wedding party guy at my table, who was "riding the wave" and blew through his $500 buy-in, the $5,000 in profits he had amassed while surfing with variance, and $2,000 more from his wallet before going under for good.
So, the moral of the story is, "It's OK to gamble if you're already a donkey."

*  I probably play blackjack or craps 4-5 times a year.  Two waitresses and the cage gal, who all work some shifts in the poker room, each asked me, "What are you doing down here?"  So, I figure I'll know I have a gambling problem as soon as I'm on a first name basis with any of the folks on the casino floor!
Posted by Grange95 at 8/01/2010 12:36:00 PM