Janice, I apologize to you if I don't seem real eager to jump into a forced awkward intimate situation that people like to call dating.  I don't like the feeling.  You're sitting there, you're wondering, "Do I have food on my face?  Am I eating?  Am I talking too much?  Are they talking enough?  Am I interested?  I'm not really interested, should I play like I'm interested?  But I'm not that interested, but I think she might be interested, but do I want to be interested, but now she's not interested?"  So all of the sudden I'm getting, I'm starting to get interested.  And when am I supposed to kiss her?  Do I have to wait for the door cause then it's awkward, it's like well goodnight.  Do you do like that ass-out hug?  Where you like, you hug each other like this and your ass sticks out cause you're trying not to get too close, or do you just go right in and kiss them on the lips, or don't kiss them at all?  It's very difficult trying to read the situation.  And all the while you're just really wondering are we gonna get hopped up enough to make some bad decisions?  Perhaps play a little game called "just the tip". Just for a second, just to see how it feels.  Or ... ouch, ouch you're on my hair.

I ran across an interesting article this weekend by Greg Beato at the Smart Set examining the historical context for the recent phenomenon of "automatic gratuities" being added to dining bills in a rapidly expanding range of restaurants (hat tip Andrew Sullivan at the Atlantic).  One interesting anecdote:

These days, the idea of not tipping is almost as impossible to comprehend as the idea of paying for news.  Who does that?  Crazy people?  Criminals?  Last fall, a pair of college students in Pennsylvania tried to settle their bill at a local tavern.  Brazenly and rebelliously, they tendered $73.87 for the food and beverages they’d consumed.  But they didn’t want to leave a tip, even though the tavern had thoughtfully applied an automatic gratuity of $16.35 to their tab. (The tavern presented this automatic gratuity as an 18 percent charge, but $16.35 is actually 22 percent of $73.87.)  Because they’d had to get their own napkins and utensils, fetch their own soda refills, and wait for their food as their waitress grabbed a smoke, they decided a more appropriate gratuity would be zero.  The tavern’s manager insisted otherwise and called the cops, who promptly handcuffed the Bonnie and Clyde duo and hauled them off to jail.  Eventually, the local district attorney had to let them go.  There isn’t any law against not tipping.  Not yet anyway.

Now, I understand imposing an automatic gratuity for large parties, so that a server stuck waiting on one big group rather than several smaller tables doesn't risk being stiffed on the tip (fewer tables with larger parties adds tipping variance for servers).  But adding automatic gratuities for routine diners essentially destroys the entire concept of tipping.  If restaurants need more money to cover wait staff payroll expenses, why not just raise prices, or impose a "service charge" in lieu of tipping?  Is it a psychological ploy, where restaurants assume their customers won't dare complain about a charge that purportedly is going to their server, not the business?  Although I have no problem with tipping as an essential part of the service industry, I do strongly disagree with the concept of a mandatory tip.  Unfortunately, I fear mandatory tips will catch on, as the restaurant industry will find the "automatic gratuity" trick a sneaky way to stick it to their customers.

Anyway, the reason this article caught my eye was that I was musing about poker tipping this weekend.  I played in an Ironman home game, where most players bought in for less than the $200 maximum for a $1/2 NLHE cash game.  Yet, at the end of a marathon session, there were some big winners cashing out.  On the other hand, I played a $1/2 NLHE cash game at the Meadows ATM on Sunday, where most players bought in for $200-$300, yet by the time I went to cash out, there were only one or two big winners, and plenty of short stacks at the table.  So, where did all the money go?

Obviously a big chunk of the cash went to pay the rake and the jackpot drop.  If you figure ~30 hands/hour, with ~20 of them hitting maximum rake ($4+$1), you're looking at ~$100 in rake and ~$25 in jackpot drop per hour coming off the table.  That's bad enough, but let's look at tipping.  Assume most players tip $1 on pots over $20-$30.  Also, some players tip $2-$5 on a large pot or to a dealer they like.  Plus, most players tip $1/drink, and a couple of bucks for food service.  All told, tips probably take an additional $30-$50 per hour off the table.  Add in the rake and jackpot drop, and you're looking at a mid-range buy-in coming off the table every hour, a buck or two at a time.  It's the proverbial death of a thousand papercuts.

Now, before getting all indignant about dealer tips, we need to look at the alternatives.  Assuming dealers make a small base hourly rate on the house's dime, dealers probably take in ~$20-$40 per hour, mostly in tips.  If a dealer works 20-40 hours per week (and many dealers likely work fewer than 40 hours per week), then a typical dealer's pay is in the range of $20K to $80K per year, with most dealers likely earning in the lower-middle part of that range.  Not bad, but not exactly getting filthy rich either.  A few dealers at the best casinos with the seniority to work the most lucrative shifts and most hours likely make better money, but they are the elite exceptions to the general rule.

Casinos obviously are not operating poker rooms for charity, so they need to turn a profit to keep the lights on and cards in the air.  Employee wages are obviously a major, if not the major, overhead expense.  Setting up a tipping system passes the bulk of the payroll responsibility to the players, and at least ostensibly motivates dealers to provide optimal service to players.  If tipping were abolished, poker rooms would need to come up with some other method of paying dealers.  Poker rooms could raise the rake—say an extra $1-$2/pot would permit rooms to pay dealers at roughly the same rate of pay, which would effectively be an "automatic gratuity" charged to the winner of every (or most) pots.  However, the incentive for dealers to deliver exceptional service would be blunted.  Also, who doubts that poker rooms would find some way to keep more of that extra rake for themselves, at the expense of dealers?

It seems like dealers and players should all prefer the current tipping system.  Players only participate (read: pay) to the degree they feel tipping benefits them, while dealers are motivated to provide excellent service.  Or are they?


Michael Lynn, a professor at Cornell, has studied tipping for decades.  “There is a rather weak relationship between the size of the tip and the level or quality of service one receives from their waiter or waitress," he concluded in a 1996 study.  Four years later, he determined that we tip better when a server crouches to take our order or lightly touches our shoulder.  In May 2010, he confirmed that we tip better when a server has large breasts.

Alrighty then, I'm willing to concede that tipping may not correlate strongly with quality of service.  Actually, I'm a good example of why tipping may not correlate with performance.*  I tend to tip above the norm, including tipping for small pots (even just winning the blinds), or tipping incompetent dealers.  Since I'm obviously immune to the breast-size factor, I can confidently say that I tip more out of a combination of habit, friendliness, and social expectation than out of a rational evaluation of a particular dealer's skills.  I do tend to tip better for dealers who are funnier, friendlier, or add something positive to the game experience.  I also tend to tip better at my local casino, or in Vegas poker rooms where I routinely log a significant percentage of my sessions.  But I have yet to encounter a dealer so bad I won't tip them on most hands, simply because that's how the live poker playing system works.  Maybe I'm actually contributing to the perpetuation of mediocrity in dealing—should I withhold tips from poor dealers and tip the best dealers even more, to encourage poor dealers to find another line of work, while giving the best dealers more incentive to stick around?  It's certainly food for thought. 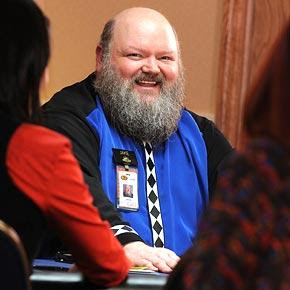 Dealer Jake, who deserves his tips, shills for the Meadows ATM.
--------------------------------------------------
* Of course, "what makes a good poker dealer?" is a tough question to answer, and the answer may vary by player.  To me, technical skill is obviously necessary, but not sufficient, to make a good dealer. Surly dealers who clearly want to be somewhere else, or "Soup Nazi" dealers who rule with an iron fist, are no good for a game, no matter how wizardly their card skills may be.  A certain level of interpersonal skill is critical, at least at the lower level "recreational" type of games most of us play.  A good dealer will add to the playing experience with some degree of personality, whether with humor or pleasant banter.  A truly great dealer can help loosen up a tight table, or help nervous newbies relax and enjoy the process of giving away their money.  I'm more than happy to tip well when a dealer makes a game more fun, more profitable, or hopefully both.
Posted by Grange95 at 8/10/2010 06:18:00 PM