I played a very short session of poker last night at the Meadows ATM.  I was driving back from a lengthy meeting with an expert witness at the University of Iowa medical center, and found my car taking the Meadows exit.  Well, my car was right, it was Thursday night, with plenty of big action players and tourney players to fill the poker room.  Problem was, management was essentially incompetent, as I stood around for nearly an hour while three—count 'em, three—floor folk stood around bickering about whether to open the 2/5 NLHE game, or a new 1/2 NLHE game.  The blindingly obvious answer was to open the 2/5 game, which would in turn open up enough 1/2 seats to get nearly everyone into the game they wanted to play.  Apparently, the sticking point was that a few guys in the 5/5 mixed game were on the 2/5 list (which was 18 deep), and wouldn't commit to opening the 2/5 game.  This in turn caused angst among the mix game players who were worried about playing short-handed.  Where is the floor with the backbone to tell these guys to stop bellyaching and just pick the damn game they wanted to play?

Anyway, I ended up playing only an hour and a half.  My table had a couple of guys I figured would spew chips, and I was right.  One guy was trying to be a table bully, but I quickly figured him out, letting him three barrel me with air.  One hand, I held 65o, called him all the way down with fourth pair, and won.  An orbit later, I held 54s, flopped the flush draw, and called his river bet after I missed with just bottom pair, and again raked the chips.  Thank you!  Come again!

The rest of the night was pretty standard for me, winning some pots with aggression, losing a couple on big draws that whiffed.  On one hand, I called a preflop raise with 98s, the flop was A-K-9, and the preflop raiser bet big.  I thought about raising, then decided it wasn't worth it.  The other guy proudly slammed down 32o, and spent the next two orbits crowing about his huge win (of $15).  Which leads to our hand of the night:

I was UTG, and found 32o. I figured, why not play it for a lark?  Maybe a little poetic justice will result.  Right on cue, big bluff guy raises to $17, a big bet at this table. Surprisingly, there are five callers to me.  I call as well to close the action—that's right we had seven players to the flop for $17 in a 1/2 NL game.  Crazy.   Anyway, flop is 9-3-2 with two spades.  Donkey Kong!  I know there will be a bet, so I check, intending to check-raise all-in.  Cue big bluffer, who overconfidently puts out $75.  Couple of folds, then hell breaks loose.  One guy raises all-in for a little over $150.  Another plays calls all-in for around $120.  I put both guys on flush draws, or maybe an overpair and a flush draw, so I push all-in as well.  Despite the great odds, big bluffer insta-mucks (hah!).  Sure enough, the other guys show QsTs and AsJs.  Turn is a Queen to give me a little sweat, but the river was a beautiful, if unnecessary, trey of clubs.  Canoe!  I rake the ~$600, and a few hands later, rack up my profit and head home for some well-deserved wine.

CAUTION:  The foregoing poker play was made by an expert (donkey) under controlled, statistically variant conditions.  Please do not try this move at home.  Remember, canoes can be hazardous to your health. 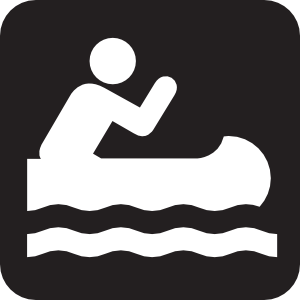